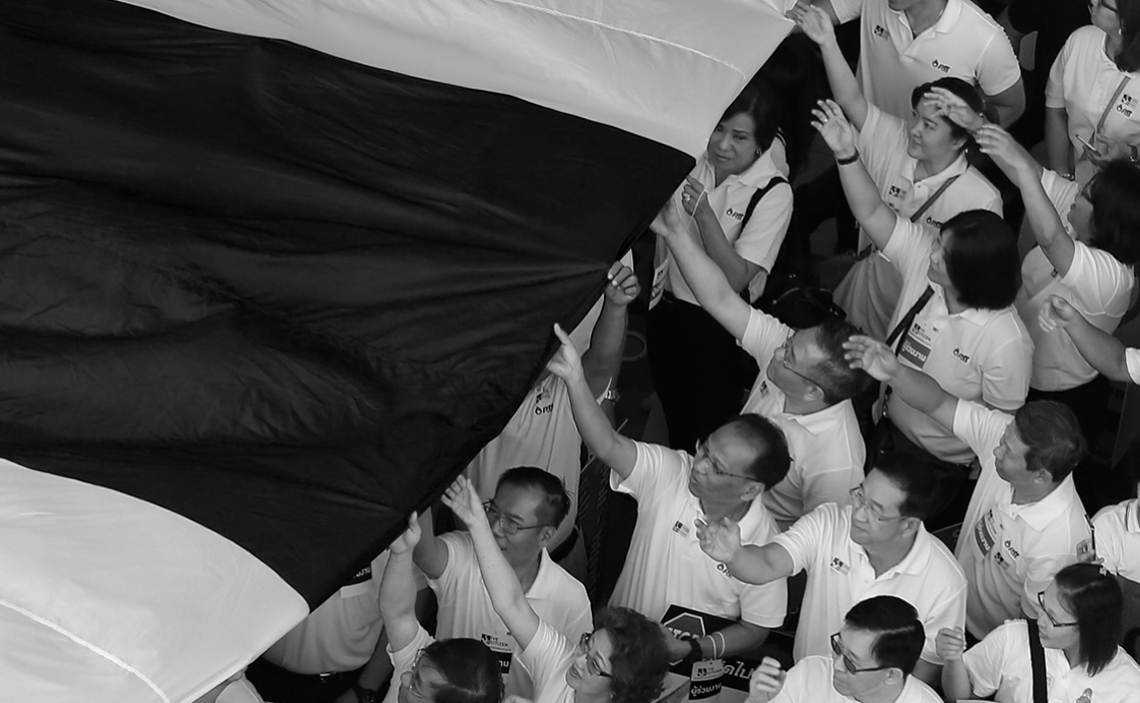 In cooperation with 13 youth organizations, the Morality Promotion Center and other organization members, ACT has organized a training camp to create awareness and understanding of the different forms of corruption for students throughout Thailand, so they can perceive the possible damage to society. This program focuses on cultivating conscience among the youth and enabling them to learn about good leadership and to practice developing a project for corruption prevention and solution.

This commercial series was produced in six versions and broadcast through television and social media.

A short documentary film and infographic contest under the topic “The Impacts of Corruption” was organized for Communication Art students to learn about corruption that has caused damage to the country, and with the hope that these mass media students will help bring about change for a better society in the future.

This one-minute documentary series has been produced and broadcast via Chanel 7 daily over the past 4 years.

In cooperation with the Office of the National Anti-Corruption Commission (NACC) and the Office of Public Sector Anti-Corruption Commission (PACC), this ACT program is aimed to create civil surveillance networks by providing workshops on investigating and monitoring state procurements. It also gives advice on analyses on federal prices and scrutinizes private organizations that enter state bidding.

Mobilized measures for transparency creation in the process of state projects

In cooperation with the Board of National Anti- Corruption, the Ministry of Finance, the Office of State Enterprise Policy (SEPO) and other related government organizations, ACT aimed to bring in anti-corruption measures that “are proved successful” overseas to apply in the process of government projects. The government saw the importance of the measures of corruption prevention and solutions, and incorporated them into national strategy as well as prioritizing on the national agenda. It also emphasized that creating good governance in management and promoting the participation of every sector in corruption investigation and surveillance in order to create transparency through the voluntary cooperation and participation from the government sector, business people and the civil sector. Currently, the government has already agreed to implementing the following three measures:


Previously in the state procurement process, only the state sector and businesses from the private sector were involved in the bidding process. However, under the Integrity Pact, a third party or “independent observer” from the civil sector was added in the process, starting from creating the Terms of Reference (TOR) to the end of the agreement. To create a transparent and fair process of procurement, this participation enables the third party to observe and monitor risks to any corruption that may happen in the procurement process.This project involves the cooperation of the Controller General’s Department, Anti-Corruption Organization of Thailand (ACT) and professional and business associations including the Consulting Engineers Association of Thailand, and Federation of Thai Industries, among others.


This national representative body of Extractive Industries Transparency Initiative (EITI) comprises representatives from the stakeholders of the government sector, the industrial sector and the civil sector and was formed to create a system of data exposure under the EITI Standard and disseminate the public information through the EITI Report available for every sector in society to put into use confidently.


initiated by the World Bank focuses on large construction projects. CoST enables the civil sector to participate in a transparency examination of a project by using a precise and understandable form of document that is useful and complete in information.

Mobilized reform of laws on corruption prevention and suppression

ACT co-mobilized the reforms of laws through a number of anti-corruption related bills including:

The Licensing Facilities ACT passed in 2015 serves as a central law that defines the procedure and duration of time used in an application for a state permit. The law covers details on an arrangement of a one-stop service channel for an application request as well as the method and procedure of application,so the public will receive convenient and speedy service while the officials can reduce their time spent and avoid personal judgment, for example. This enables the public to plan for their business efficiently while experiencing transparency in their communications with government agencies.

The Act is considered to have played a big role in solving the “bribery demands” in Thai bureaucratic systems as ACT worked alongside the Ministry of Industry in a revision of licensing a factory permit (Ror Ngor 4) for business operators and, meanwhile, encouraged state organizations to publicize and educate the public on the importance and better use of this Act.

This decree officially implemented in 2015 is considered a huge reform of the government’s bureaucratic systems and procedures. It benefits the nation in several aspects such as anti-corruption, economic and investment promotion, discrimination reduction, equality creation and reduction in the abuse of power by government authorities.

The Anti-Corruption Organization jointly prepared the “Regulatory Guillotine” Project, an effort to solve corruption in terms of structure, by pushing towards the cancelation of a number of laws (around a hundred thousand laws in total),leaving only those laws that are “simple, clear, burden-less and fair”. This project is expected to help promote efficiency in the government’s public services in accordance with the Facilities Act and the Decree on Evaluation of Legislation that aim to create convenience, reduce burden for the public and,eventually, minimize factors that promote corruption.

A declaration on opposition to an amnesty for corruption cases

In cooperation with allies from the business, finance and investment sectors, ACT declared its opposition to the amendment of laws regarding any corruption court cases (Section 3 in a draft of the Amnesty Act), stressing that all corruption court cases must enter the judicial process to the end. The declaration is expected to establish a proper norm for The Thai judicial system and make corruption suppression in Thailand fairer, more tangible and more respectable.

In cooperation with the civil sector and the press, ACT held a press conference to seek updates from government organizations on major corruption cases since most important corruption cases usually follow a lengthy process, causing delays in the judicial process and a lack of fear towards the law by the corrupt. These 15 cases were divided into 4 groups as follows:

ACT, in cooperation with the Office of National Anti-Corruption Commission (NACC) and the Office of Public Sector Anti-Corruption Commission (PACC) recreated information into a sculpture exhibition under the theme Museum of Thai Corruption so as to reveal 10 infamous corruption cases and scandals that have caused tremendous damage to the nation. The exhibition enabled the audiences to see and understand the origin and route of each case easily and clearly. The presentation was also available on the Museum of Thai Corruption website for the public to view and share with others as well as to create better awareness among the public. A TV commercial and an infographic presentation of the Museum of Thai Corruption were created and also presented in other forms including a still-picture, a slide and a video.

The Anti-Corruption Organization of Thailand wishes for Thailand to completely and constantly develop into a corruption-free society through the following five major measures:

Reform of laws and justice systems

Connections and power have been abused and misused to conceal wrongdoings, causing delays in the justice process, loss of confidence in the Thai law and fear among the public to come forward and report any suspicious incidences to the authorities.

Revise and implement serious penalties and a speedy legal process along with adequate protection for informants and changes in regulations to prevent bribery and corruption.

Facts and information for the public have been covered and/or distorted while the general public cannot exercise their rights to provide their opinions, especially on government projects that barely consider the needs of the general public.

Create awareness and alertness among the public, promote empowerment of the public’s voice and expand

Campaigns on moral and ethics

Misperceptions towards corruption are many, for example, that a little corruption is acceptable, that corruption is not uncommon and not to feel ashamed,and that subordinates should just follow the steps of those above them even if corrupt (the practice of “going-along–with-the-flow”)

Promote a conscience of right and wrong and good or bad, cultivate the value of sufficiency and make the public aware of the different forms of corruption through the creation of a new culture.

Complex laws and regulations lead to mistakes in the procurement process in government projects and open opportunities for exploitation for personal benefit.

Mobilize towards the development of regulations and an “Integrity Pact” Project to be implemented more quickly and empower the public in examinations and provide access to information.

Threats against personnel on duty at anti-corruption organizations, overload of corruption cases, impaired transparency and inefficiency

Extend the scope of authorization, improve mechanisms for speedy work and enhance efficiency in the use of budgets and personnel.